Shares border with 7 states, providing access to 40% of India’s population 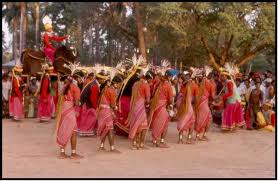 Chhattisgarh is located in central India.  The state shares its border with  Madhya  Pradesh  & Maharashtra in the west,  Uttar Pradesh in the north, Odisha and Jharkhand in the east and Andhra Pradesh in the south.
The languages spoken are Chhattisgarhi and its local dialects,  along with Hindi & English.
Raipur, Bhilai, Durg, Bilaspur, Korba & Rajnandgaon are some of the major cities of the state.
Chhattisgarh has a tropical climate with three major seasons: summer  (April-June),  monsoon  (July-September)  &  winter  (OctoberMarch).

The state accounts for approximately 15% of the total steel produced in India. Industrial infrastructure in the state has been strengthened through creating state-of-the-art facilities in the industrial areas. Presently, there are 52 developed industrial areas in the state. The state also has an installed power capacity of over 14,000 MW.

The State of Chhattisgarh has emerged as a lucrative investment hub among its competing states with sectors. Chhattisgarh attracted foreign direct investments in power, manufacturing, services, mining and construction sector. While the State administration is based in Raipur, a new capital for Chhattisgarh at Naya Raipur has been developed. Chhattisgarh in its industrial policy has declared textile as a priority sector. Chhattisgarh is one of the premier states in the production of Tasar cocoons, yarn, and fabrics. Silk products from the state are famous for their quality and have good demand in-country as well as international markets.

Chhattisgarh state industrial corporation (CSIDC) is planning to set up an integrated textile park in Village Khupri in Tilda, Raipur. CSIDC has identified a land parcel of 32 hectares for this project. Project is being planned as per Scheme of Integrated Textile Park (SITP) of Ministry of Textiles, GoI The proposed Textile park at Tilda is aimed at providing one-stop integrated facilities with manufacturing support, welfare and common infrastructure facilities to the prospective textile industries. The proposed textile park is envisaged to house world class eco system for textile industry.