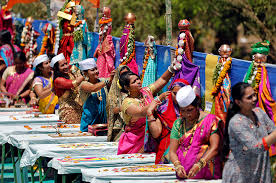 he  most  commonly  spoken  language  in  the  state  is  Marathi.Konkani, Hindi and English are the other prominent languages.

Maharashtra  is  situated  in  the  western  region  of  the  country.  The state  shares  borders  with Gujarat,  Madhya  Pradesh,  Chhattisgarh,Andhra  Pradesh,  Karnataka,  Goa  and  the  Union  Territory of  Dadra and Nagar Haveli. On its west is the Arabian Sea.? Mumbai,  Pune,  Nagpur,  Thane,  Nasik, Solapur,  Kolhapur,  Sangli,Aurangabad,  Amravati  and  Ratnagiri  are  some  of  the  major  cities  of
Maharashtra.
India's  main  stock  exchanges,  capital  market  and  commodity exchanges are located in Mumbai.

The Central Government announced its revised textiles policy in the  year  2000.  Thereby  an opportunity  has  been  given  for taking  necessary measures  to  develop  the  textile  sector  in  the  country,  and  for  the  States  to expand/develop industries affiliated to manufacturing of textiles. In order   to avail  benefits  of  the  Central  Government’s  policy,  some  other  States  of  the Country  have  announced  independent  policies  for  their  State.   In  2006  the current industrial policy of the State was nnounced, wherein an assurance   was given  that  an  independent,  comprehensive  policy  would  be  prepared  for textiles  industries  which  play  an  important  role  in the  States  economic development. Textile ndustry is second only to agriculture in   importance. It has  the  capacity  to  create  the  maximum  jobs/employment  after  agriculture.
The object of the policy is to lay special emphasison raising processing units at  various  levels  from  cotton  to  manufacturing  textiles  for  the  assured  long term development on priority basis in the cotton producing sector, expansion of the textile industry and growth of employment inthe State. The aim of the policy is to attract a total investment of Rs. 40,000/- Crores in the sector for the  purpose  of adding value to  45  lakh surplus  cotton  bales  produced  in  the State. It is proposed to create 11 lakh new jobes in the State in next five years in  the  sector.   During  last  three  years  Meetings/seminars  have  been  held  at different  levels  and  the  suggestions  received  have  been  considered  while formulating the textile policy of the State. The proposal to announce the new textile policy was under consideration of the Government.